I've been thinking about time a lot lately.

On the long list of possible futures in the history of me there was a time when I thought I might be a filmmaker. It didn't last long; a couple of years with a collective outcome of about ten minutes, but what it did imprint is a love of stop motion; of the act of constructing pauses, of deconstructing action into a series of interconnected frames of time. It is the most beautiful and excruciating process - of being physically held in one eighth of a second ago, and figuring how to get one eighth of a second into the future.
This film is something I've been wanting to try for awhile, and it's also a kind of homecoming.

Before that brief affair with film there was a slightly longer engagement with architecture. (It didn't end well, it was me, not you.) I think part of the frustration I still feel to this day was, for me, in its lack of plasticity, in its need to be an eternal, monumental exercise with no use-by-date, and, contrarily, In its lack of specificity.
I saw a building in a magazine once which had a tiny window placed just so, that at a certain time of day at a certain time of year the sun would pour itself in and lie like a luminous carpet at the exact angle to emphasize the beauty of a horizontal surface meeting a vertical one and I thought that's it, that's exactly what it should be but i was overwhelmed by bricks and councils and the need for a nice lounge area and a place for the television that it just about choked out every inch of love for the medium.
Not quite though. So then;

Architectonic. Well, yes, about architecture, or at least, about a sense of structure. Also though, an allusion to something fundamentally human, about our presence on this blue sphere, to the impact we have imposed upon its fragile changing surface, and the reciprocal shifting present of the strata beneath us whose dramatic gestures are both horrifying and stupendous, and serve to remind us constantly that we are not really flying the plane.

So something about that specificity, and time, and dramatic fictional change all came together in this exhibition, which is why a building can continually construct and deconstruct itself, and yet be held in a rotating stasis, and yet be the subject of a series of horrifyingly specific possibilities in order to allow one a pause to appreciate the exact moment to experience time as its ever present, ever changing thing, without distractions. And really great lighting.

There have been nineteen named islands created in the last two hundred years thanks to volcanoes. In the next two hundred we will likely lose somewhere around that number to rising seas. Of course there are drones everywhere now recording everything for everybody's viewing pleasure, but there is part of me that thinks how beautiful it would be to be able to slow time in that way that it tends to slow during accidents, to stand on the precipice of some specifically constructed vantage point and watch the world change.

Just for a second. 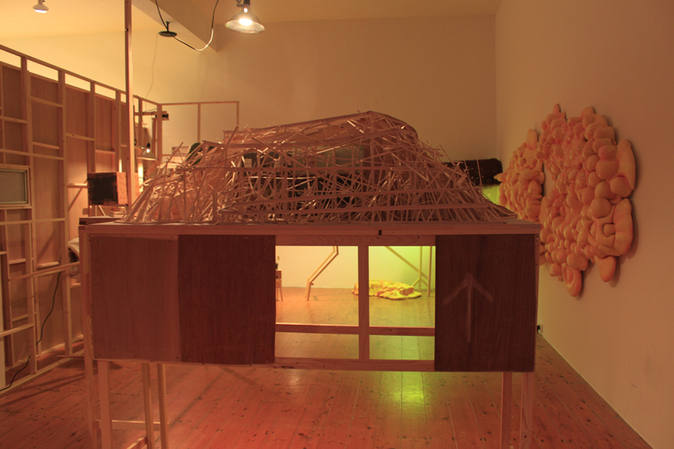 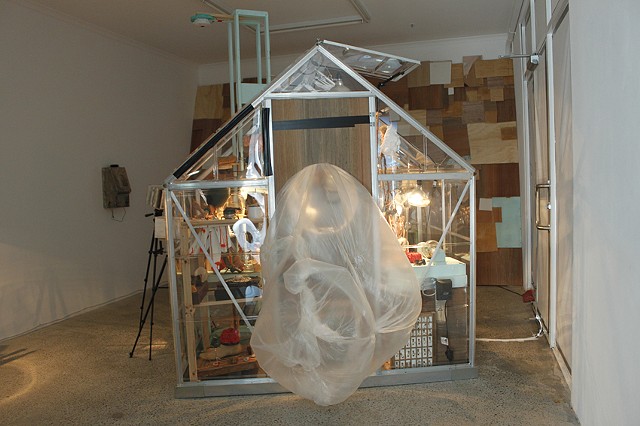 The Umbra
Documentation of the exhibition "The Collector; The Umbra" held at MOP gallery, Sydney 2014. 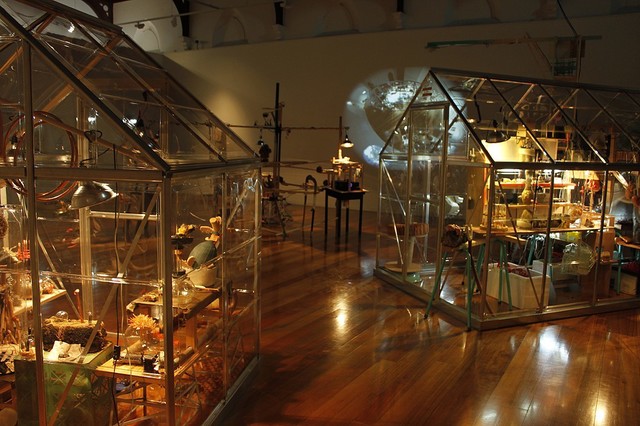 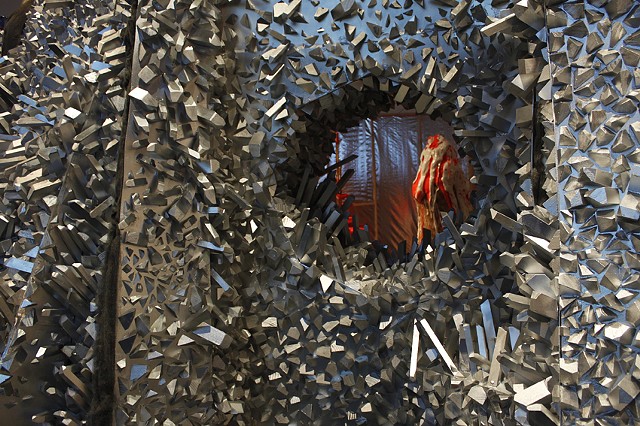 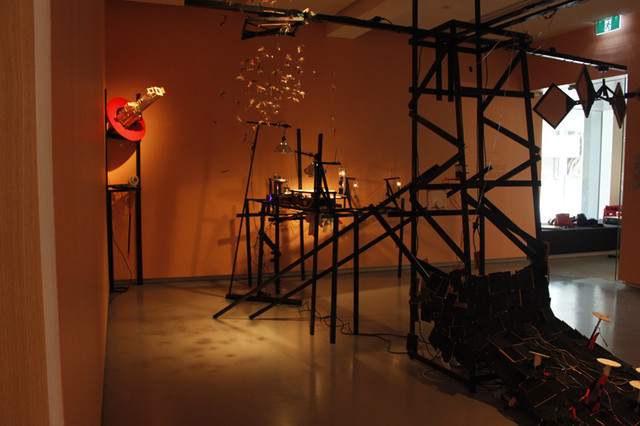 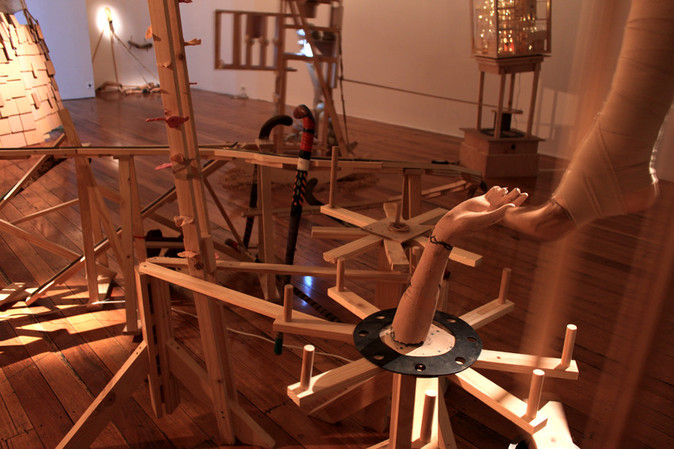 Schema
Documentation of the exhibition "The Collector; Schema" held at Carnegie gallery, Hobart 2010. 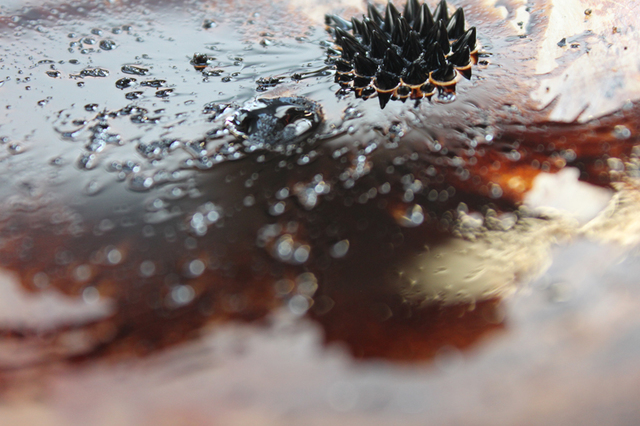 Magnetic Confuence
Shown initially in the exhibition "The processor of circumstance" 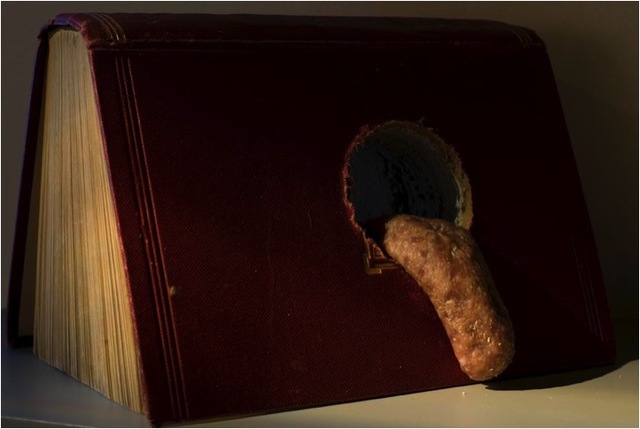 L'ortolan
L'Ortolan was a video element of the exhibition The Collector 8, shown at the Carnegie gallery in 2012.
Loading...